Update: if you're into sampling or beatmaking, here is how to remove drums from a song!

So you want to use your music production software, with low latency on your PC/Windows laptop?

You have basically two options:

Michael Tippach's ASIO4ALL is incredibly useful for the PC music community since more than 10 years, because it turns your cheap computer's built-in soundcard into a low-latency one! With ASIO4ALL, you can plug a MIDI keyboard and play piano or synth with no "delay". Without it, the delay of more than 50 ms between the keypress and the sound makes it nearly impossible to play.

But ASIO4ALL has one major drawback: it's not multi-client. This means that if your DAW is open with ASIO4ALL as sound driver, then, if you open:

... then it won't work: the audio is not available for them: your DAW and ASIO4ALL have locked your soundcard.

This is really annoying and I can't count how many hours of my life I wasted since 10 years to find a solution for this (every few months/years I retried and retried and benchmarked every new method). (Ok switching to Mac would have been a faster solution...)

The real difficulty is that we would like to use

Here is a list of things I tried, unsuccessfully:

SamplerBox - a hardware sampler (to be continued) 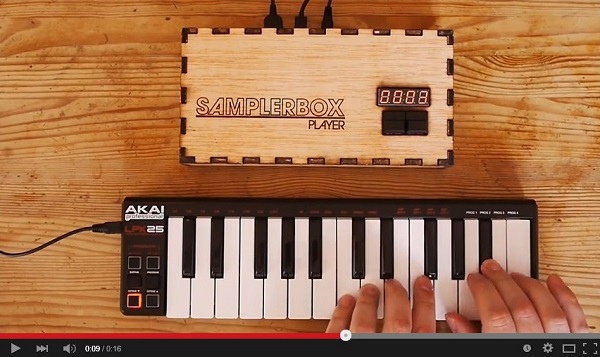 This is in my Top10 biggest projects.

For many years, I had been looking for a small portable inexpensive sampler that can be used to play a good 1 GB piano sample set (with many velocity layers and supporting sustain pedal), a 500 MB Rhodes piano sampleset, drums, etc. and all sorts of sounds.

There was nothing like this on the market, but instead:

So I started brainstorming about this (this was my first sketch, I always search ideas with a pen + paper):

... and came to the idea that this could be possible with a Raspberry Pi. I then started to code a mixing engine in Python. Everybody told me "This is impossible, you won't be able to have a decent polyphony with Python, it's not fast enough...". The challenge was appealing for this reason and also because the only solutions available on Raspberry Pi at that time were 6-voice polyphony software samplers.

I spent days on this, and finally released both open-source code and hardware (rough) schematics:

Here is the blog: https://www.samplerbox.org/blog

I was happy to achieve a polyphony of ... nearly 100 voices at the same time, so my mixing engine in Python+Cython was not too bad ;)

Then it's a long story, many people contacted me, a commmunity growed on the forum (I should do a post about the software powering the forum, it's handmade too), etc.

Python comes with the built-in wave module and for most use cases, it's enough to read and write .wav audio files.

But in some cases, you need to be able to work with 24 or 32-bit audio files, to read cue markers, loop markers or other metadata (required for example when designing a sampler software). As I needed this for various projects such as SamplerBox, here are some contributions I made:

Here is how loop markers look like in the good old (non open-source but soooo useful) SoundForge:

Lastly, this is how to convert a WAV to MP3 with pydub, for future reference. As usual, do pip install pydub and make sure ffmpeg is in the system path. Then:

will convert a WAV file to MP3.

Interested for future evolutions and other audio programming tools?

Get the reverb impulse response of a church

I recently recorded an impulse response of the reverb of a 14th-century church (more or less the footprint of the sound ambiance of the building). Here is how I did it. 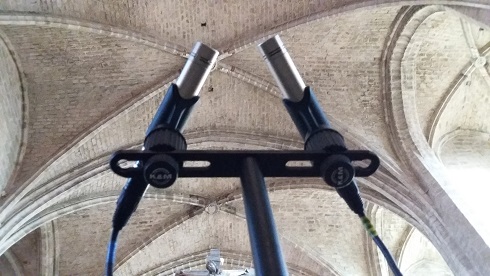 Quite a lot of reverb, that's exactly what we want to catch with an IR!

Then, of course, we can do some cleaning, fade out, etc.

But what is this useful for? You can use this Impulse Response in any music production software (the VST SIR1 is quite good and freeware) , and make any of your recordings (voice, instrument, etc.) sound like if they were recorded in this church. This is the magic of convolution reverb!

Useful trick when you record your own IR: play sweep0.wav in the building instead of sweep.wav. The initial "beep" is helpful to see exactly where things begin. If you don't do that, as the sweep begins with very low frequencies (starting from 20 Hz), you won't know exactly where is the beginning of your microphone-recording. Once your recording is done, you can trim the soundfile by making it begin exactly 10 seconds after the short beep.

Some related reading in this topic, and this blog post.